OpenTTD is licensed under the GNU General Public License version 2.0. For more information, see the file COPYING included with every release and source download of the game.

OpenTTD is modelled after the original Transport Tycoon game by Chris Sawyer and enhances the game experience dramatically. Many features were inspired by TTDPatch while others are original.

Significant enhancements from the original game include for example:

bigger maps (up to 64 times in size)
stable multiplayer mode for up to 11 players in 8 companies or as spectators
dedicated server mode and an in-game console for administration
new pathfinding algorithms that makes vehicles go where you want them to
autorail/-road build tool, improved terraforming
canals, shiplifts, aqueduct
larger, non-uniform stations and the ability to join them together
mammoth and multi-headed trains
clone, autoreplace and autoupdate vehicles
possibility to build on slopes and coasts
advanced/conditional orders, share and copy orders
longer and higher bridges including new ones, full flexible tracks/roads under bridge
reworked airport system with many more airports/heliports (i.e. international and metropolitan)
presignals, semaphores, path based signalling
support for TTDPatch newgrf features
drive-through road stops for articulated road vehicles and trams
multiple trees on one tile
bribe the town authority
many configuration settings to tune the game to your liking
save games with zlib compression for smaller sizes which does not interrupt gameplay
big support for internationalisation. OpenTTD is already translated into more than 40 languages
dynamically created town-names in 18 languages and newgrf support

Lots of effort has been put into giving OpenTTD a better usability. These include:

convert rail tool (to e-rail, monorail, and maglev)
drag&drop support for almost all tools (demolition, road/rail building/removing, stations, scenario editor...)
sorting of most lists based on various criteria (vehicle, station, town, industries, etc.)
mouse wheel support (scroll menus, zoom in/out)
autoscroll when the mouse is near the edge of the screen/window
sell whole train by dragging it to the dynamite trashcan
cost estimation with the 'shift' key
advanced options configuration window, change settings from within the game

screenshots can be in BMP, PNG or PCX format (select in game options menu)
more currencies (including Euro introduction in 2002)
extra viewports to view more parts of the gamefield at the same time
resolution and refresh rate selection for fullscreen mode
colourful newspaper after a certain date
colour coded vehicle profits
game speed increase (through fast forward button or by pressing the TAB key)
snappy and sticky windows that always stay on top and neatly align themselves to other windows
more hotkeys for even less mouse-clicking
support for 32 bit graphics

Posting a full list would be futile as it would mean updating this page almost daily, and even then some things might be forgotten. Play with the game to experience all the features yourself, or look further at Wiki for a more thorough listing and explanation of the features and possibilities ingame.
Screenshots 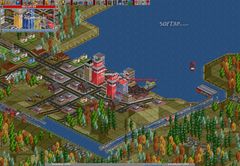 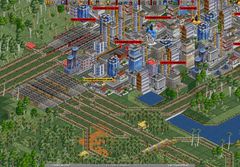