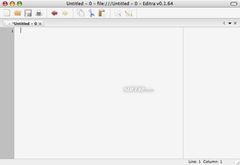 Editra is freely available under the terms of the GPL.

Currently the project is in the alpha development phase but test builds of "stable" points are available for download and trial as Windows and Mac OSX(Universal) binaries, currently other Unix and Linux based systems will have to install from source using the included setup script. Please feel free give it a try and to report bugs and feature requests.
Screenshots